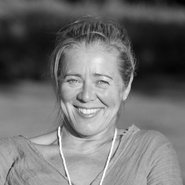 My name is Eva. I was born in Sweden. I use to live both in the south part of Sweden and in Stockholm. Yoga came into my life 1999. I was exhausted after many years of hard work and university studies. I needed to find peace and calmness to find better balance in life. Yoga gave me tools to feel better. After some years I wanted to get deeper into yoga. I took a basic vinyasa yoga education 2009 with Pia Wallberg (my first yoga teacher) and after a while I started to teach Hatha flow basic classes in her studio (Sattva yogastudio in Stockholm), a combination of hatha/vinyasa yoga. 2012 I went deeper and took an other education, ISHTA Vinyasa yoga in Stockholm with Ulrica Norberg as the head teacher and her team. Ulrica has become a very important source for inspiration and continued devlopment for me and my yoga. Luckely I have had possibilities to join her workshops and differnet educations and I´m very grateful and hope to continue with that as long as she´s sharing her knowledge. 2015- 2016 a yin yoga education with her and 2016 a deeper chakra yoga course. 2019 I joined her great workkshop in Monte Velho Portugal.

For me yoga include many things, asanas, breathing and meditation. Ayurveda and pranayama is also two big ingredients in my life. With them, I get better balance in life in many ways and on different levels. Ayurveda help me keeping good healty rutines in life and also keep my body in better balance.

Pranayam is one part of yoga that I studied a little bit deeper in In Kaivalyadhama yoga institute, Lonavla India. I have had the privlege to do a pranayama teachers training courses 2013, 2014, 2015 with Shri. O.P. Tiwariji. He´s sharing his fantastic knowledge about our possibilities to grow from the inside and to find the source of power, energy and not the least, harmony and joy in life. 2015 I got my pranayama teachers licens.

2011 I also moved to the country side in south part of Sweden and was working in a yogastudio for a while until I opened my own studio in the beginning of 2014. A great experience during three years

where I met a lot of nice people and also learned a lot.

We decided to move to a warmer climate and came to Valle del Sol, Andalucia, España september 2017.

I´m slowly getting in to teaching again but I´m also letting life take some more time then I did before.

It´s a great privilege and I´m enjoying my new spanish way of living.

As a yoga teacher I hope being able to share the knowledge and possibilites yoga is giving me and of course also continue bring in more knowledeg and wisdom from yoga and from people I get to meet..

Yoga got a lot to offer in many different ways, if we want to bring it in to our lifes......

Our way of living affects our lifes"   Live well and feel good!